At JEA we have had the opportunity to work with a variety of clients.

As Nanaimo has grown, the staff at J.E. Anderson & Associates have provided tremendous expertise as land development consultants to many of the new subdivisions that have cropped up. One such development is in the South Harewood neighbourhood, close to Vancouver Island University.

The engineering team from J.E. Anderson’s Nanaimo office have been working on a large, 48-lot, single-family fee-simple subdivision in that area, at 527 Ninth Street. This is a continuation of the three-phase subdivision at 1099 Bruce Ave. that J.E. Anderson also worked on.

The Ninth Street project started in Fall of 2016, and involved rerouting an existing drainage course so as not to disrupt aquatic habitat and ecosystems. The Ministry of Environment provided strict work time windows when the stream was driest, to avoid silty water flowing downhill. Within the relocation designs, civil engineering staff from J.E. Anderson were able to add some storm water management features. With the features incorporated, rainwater absorbs better into the ground and water flows are less likely to affect downstream infrastructure. 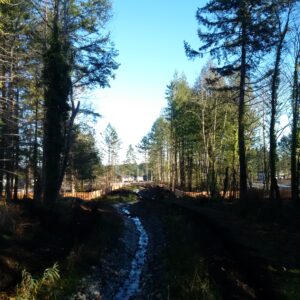 J.E. Anderson completed all the road and servicing designs, and worked with the landscape architect to make the new stream a feature in the new city park next door, which has a trail system connecting to the Nanaimo Parkway trail. Civil construction, including roads and underground services (eg. storm water, sanitary piping, hydro, etc.), was expedited in order to meet the City of Nanaimo and developer’s deadlines. It started in May 2017 and was completed in November 2017.

“We are proud to have worked seamlessly with everyone on the team to complete this project in such a short time frame,” said Scott Stevenson, Civil Engineer and Partner at J.E. Anderson.

Stevenson also mentioned that this subdivision is noteworthy in that it has incorporated a lot of green, natural features. These include grassy boulevards and a 2.5-acre park with trail system and stream. As a result, this beautiful subdivision brings much-needed new family housing to a neighbourhood that is growing and changing.